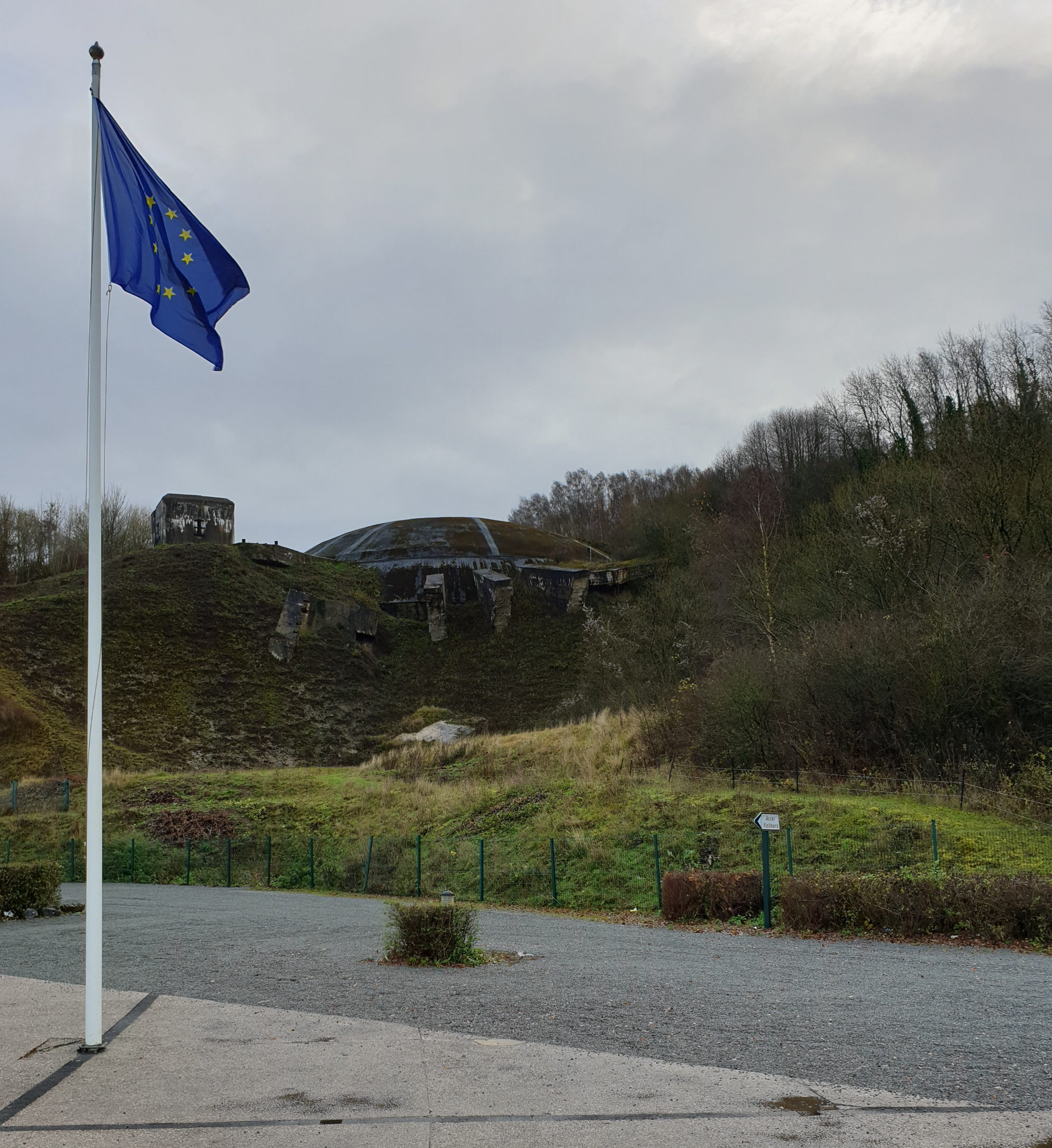 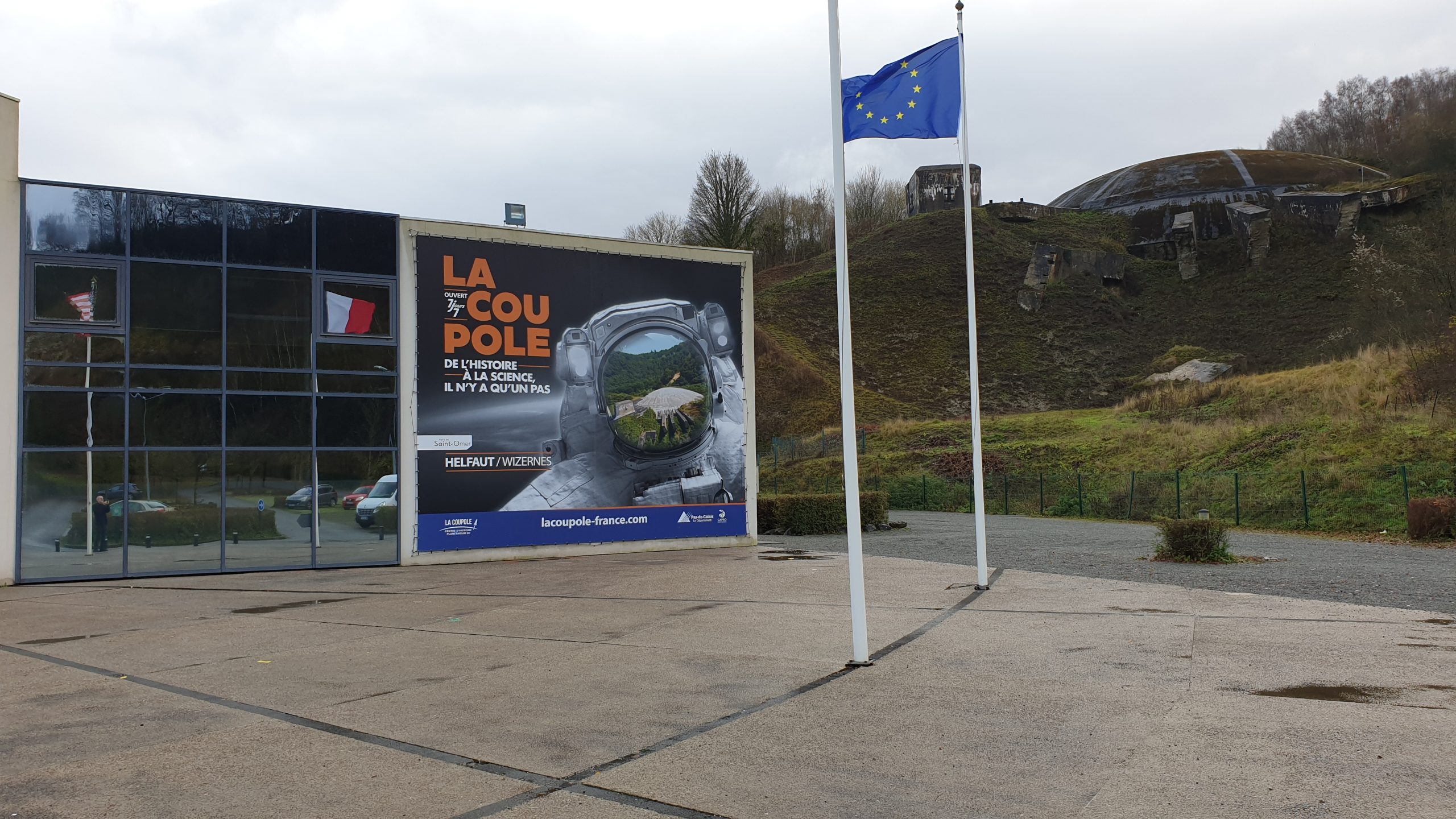 Why yes, that is an astronaut with La Coupole reflected in his visor. Because … France? My visit already seemed pretty surreal, but this was just the start. 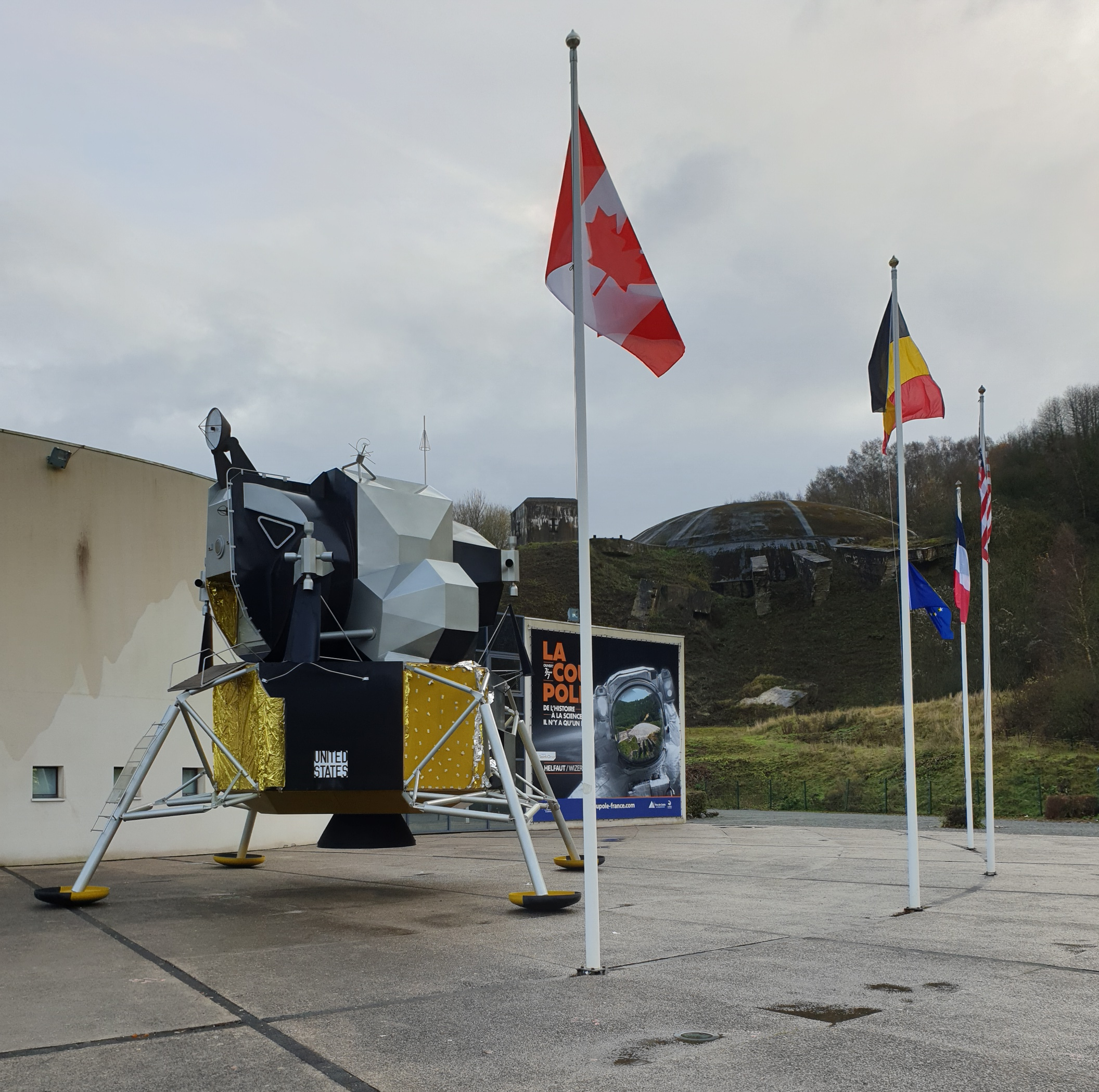 Echoing down the tunnel is the audio from clips of Apollo 11, including Neil Armstrong’s steps on the moon.

Construction at La Coupole was carried out by slave laborers from concentration camps who were being literally worked to death. When you enter the tunnel at Fort Breendonk, a couple hours to the northeast in Belgium, you hear the recording of a guard shouting commands, alternating with the sound of a man screaming, which creates the atmosphere of a concentration camp. Here La Coupole, every bit an Arbeitslager, has the atmosphere of a spaceport, sort of France’s Cape Canaveral.

This is nearly the only mention of suffering at La Coupole. There is also a collection of drawings and photographs from Nordhausen, and discussion of conditions there, along with exhibits on the space program and the race to the moon. 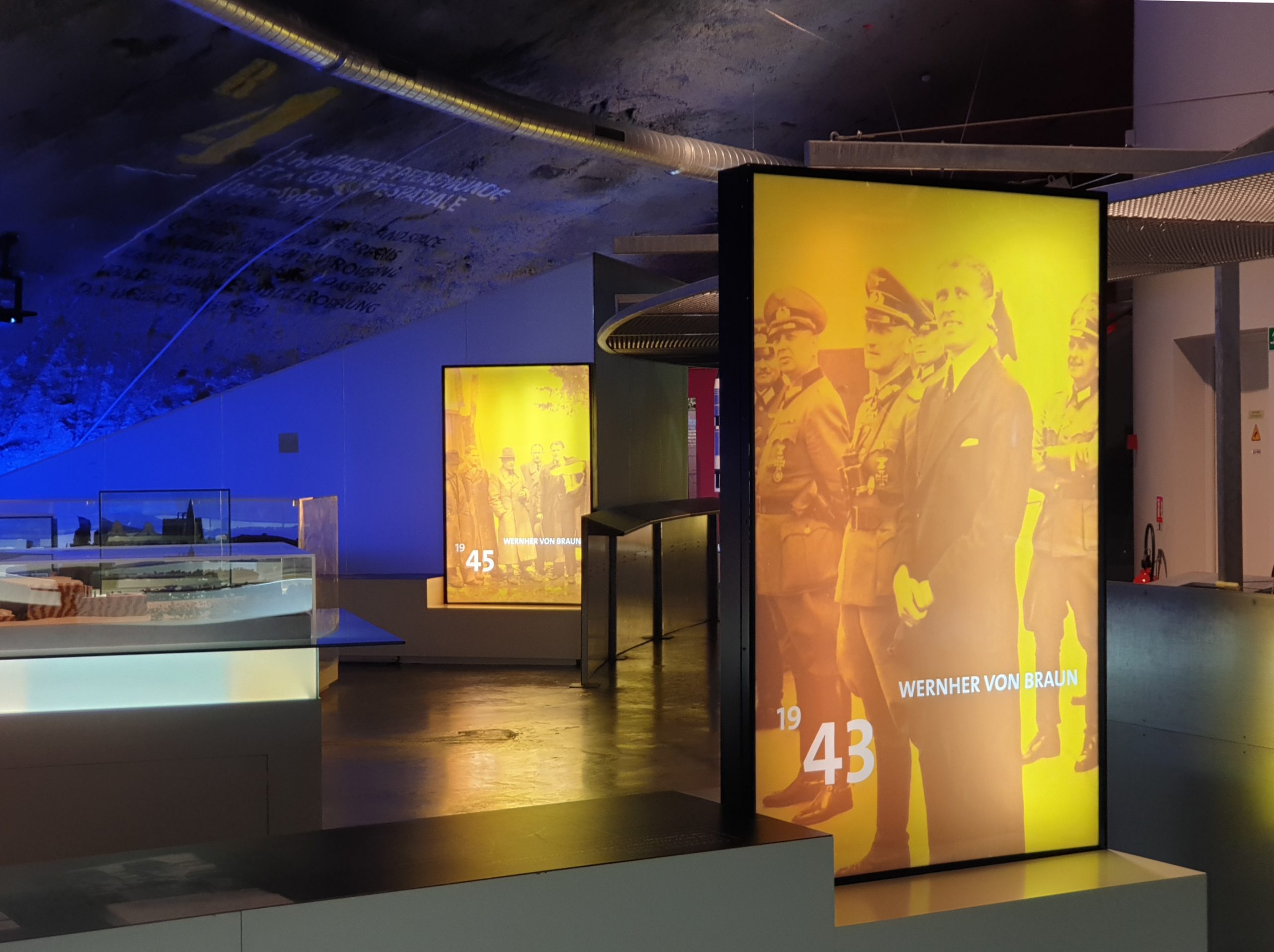 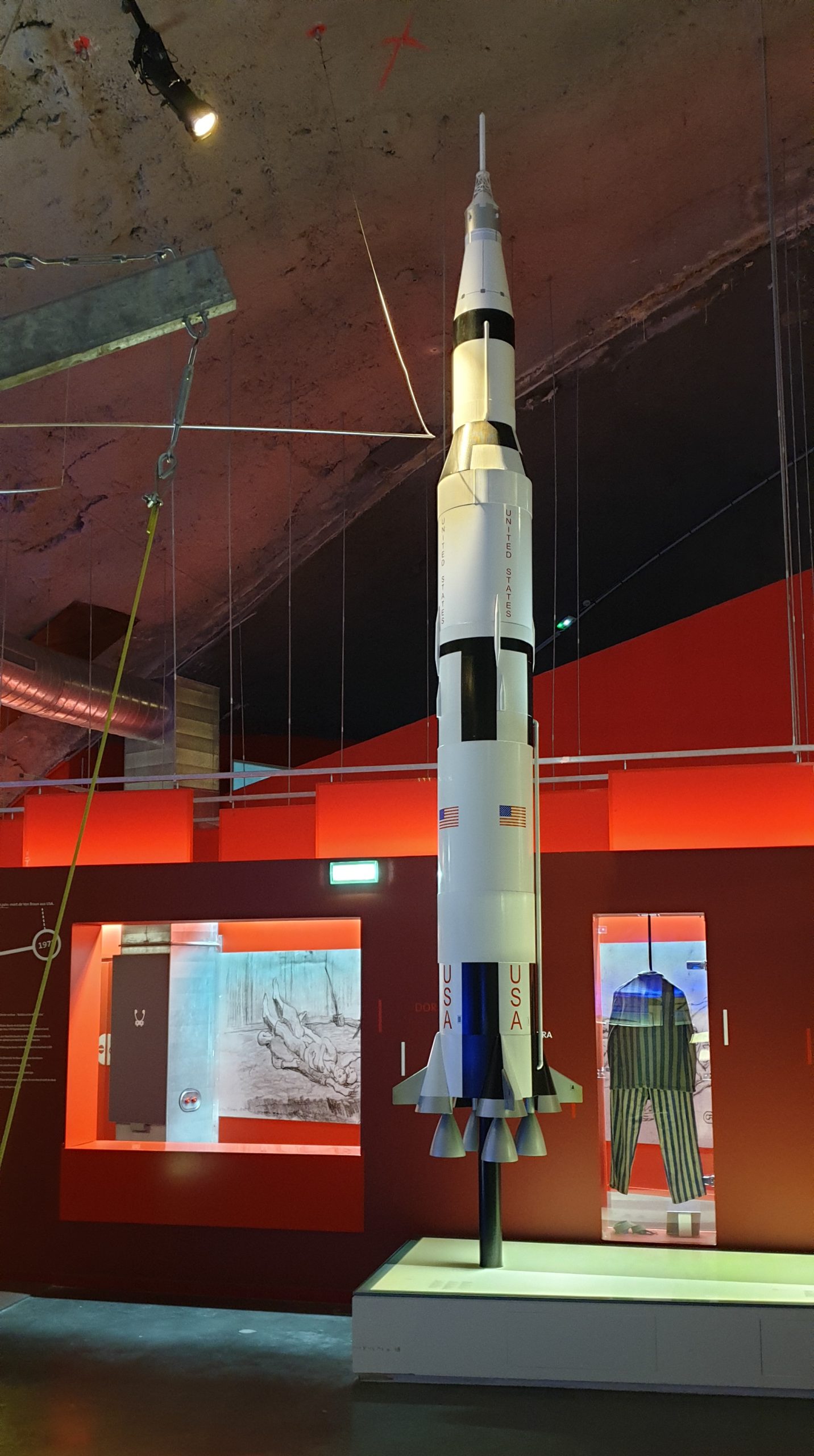 The drawing and concentration camp uniform on the other side of the partition are from the exhibit about Nordhausen. You can see the word “Dora” (Nordhausen) on either side of the first stage of the Saturn V. 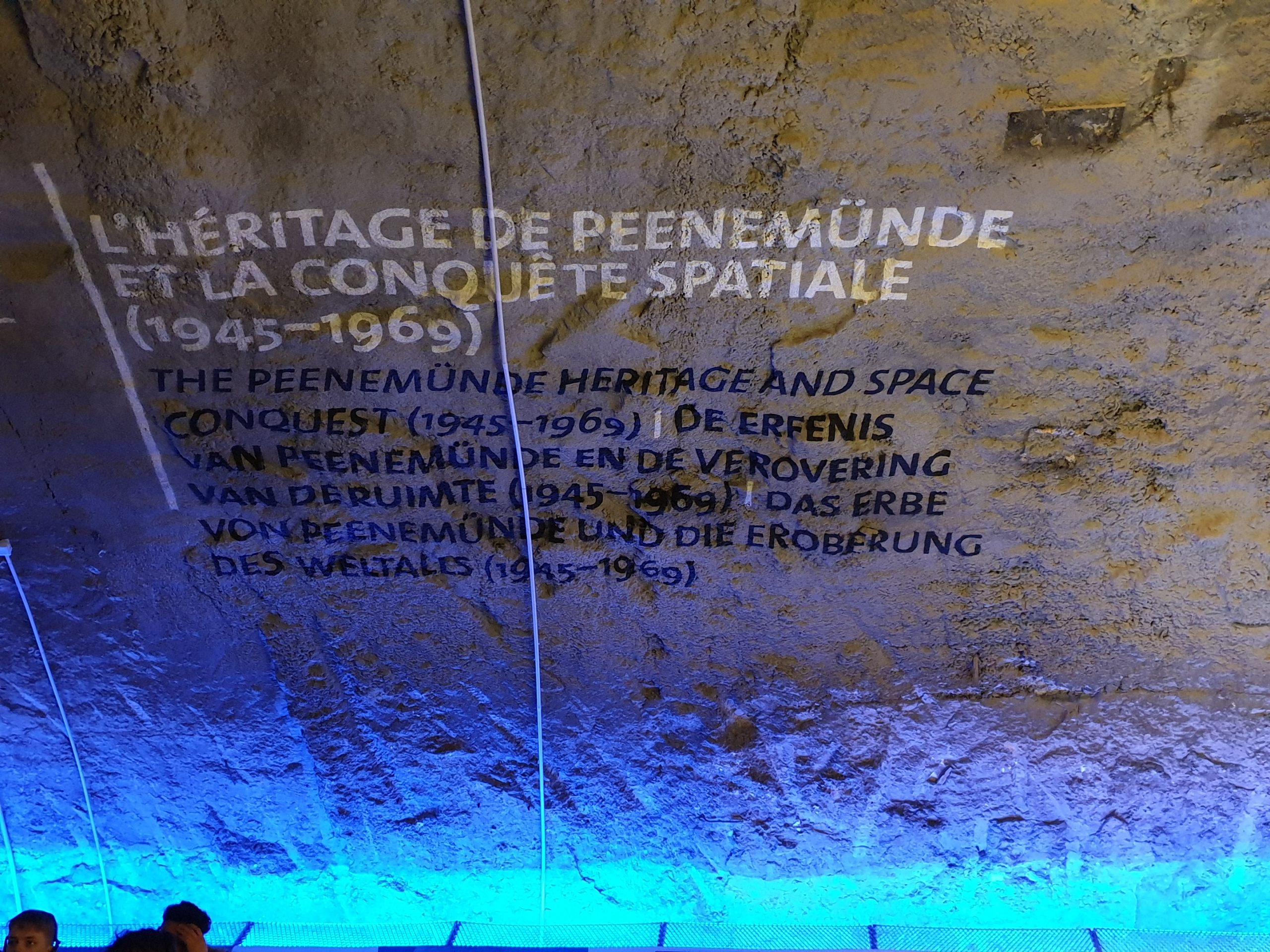 At Peenemünde there is, of course, also an exhibit on connections between Peenemünde and the space race — Peenemünde was a research center. The bulk of the displays there, though, were about what actually went on at that site. Here at La Coupole the attempt seems to be made to ignore as much as possible what went on and what was intended here, and to attempt to claim La Coupole somehow made some contribution to the US landing on the moon.

Text both in the video on the French experience with occupation and liberation and on the wall displays has a similar loose connection to reality and strong commitment to French chauvinism. At one point in the film on the occupation the narrator says “In the north collaboration is reduced to a handful of fanatics” (Robert Paxton would disagree). If you were a child or otherwise have very little knowledge of World War II you might easily come away from the museum understanding Canadians and the French Resistance liberated France with help from Britain. Why the Resistance permitted the US to be involved with D-Day would be unclear.